Fans of superhero movies may be looking forward to the 2022 reboot of the Batman franchise.

The film due out next year is called THE BATMAN, and in the film, a new Batmobile will be seen for the first time.

Ahead of the movie’s debut, Lego has a new Technic kit to construct the Batmobile from the film.
The kit is large with 1360 pieces and is rated for ages ten and up. One of the more interesting aspects of the blocky model is that it comes with a pair of light bricks with one red and one yellow. The red brick is designed to add a glow to the engine at the back, while the yellow brick lights up the front grill.

The Batmobile is the fictional car driven by the superhero Batman.

Housed in the Batcave, which it accesses through a hidden entrance, the Batmobile is both a heavily armored tactical assault vehicle and a personalized custom-built pursuit and capture vehicle that is used by Batman in his fight against crime.

Using the latest civilian performance technology, coupled with prototype military-grade hardware—most of which was developed by Wayne Enterprises—Batman creates an imposing hybrid monster to prowl the streets of Gotham City.

This muscle-car-style model can be displayed next to the 1989 Batmobile immortalized in an earlier 3306-piece Lego kit, and it costs a fraction of the price. 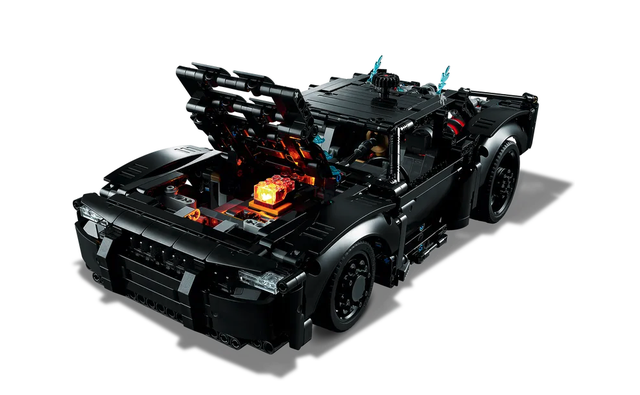 A newly released Batmobile Lego Technic set is a retro-looking car based on the vehicle that will be featured in the 2022 film The Batman.
This set contains 1360 pieces and includes two light bricks, moving pistons, a spinning flame exhaust, front steering, rear differential, and opening doors and hood.
This set is available for pre-order and will start shipping on November 1, priced at $99.99.

Lego is releasing a new Batmobile Technic set based on the personal vehicle that the caped crusader will be driving in the upcoming film The Batman starring Robert Pattinson. The film was expected to release this year but was delayed due to the COVID-19 pandemic, but this Lego set is a good outlet for fans waiting for its eventual release.