You don’t need to be in the United States or even competing in the Boston Marathon to recognise the significance of the event.

In a year that’s been dominated by the global pandemic with public sporting events largely closed as a result, the prospect of seeing fun runs return to our streets has seemed a long way off. But as vaccination rates around the world continue to increase with great speed, the return of the Boston Marathon suggests we might finally be on track, a small sliver of the normality we once knew in a year that’s been anything but. 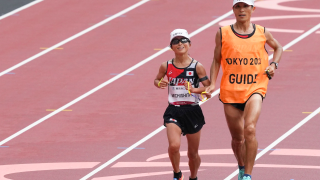 When Misato Michishita won the Paralympic marathon in Tokyo this summer, she picked up more than a gold medal.

The visually impaired Japanese office worker became a must-get for organizers of Monday’s Boston Marathon, where she will headline one of three new para divisions being unveiled for the 125th edition of the race.

“I had a dream about running a Boston Marathon for a long time,” Michishita said this week. “Most runners have the goal to run the Boston Marathon, so I would like to be a part of that.”

The first major marathon to include a wheelchair race, in 1975, Boston has named a champion in a visually impaired division since 1986. But ever since the 2013 finish-line bombing that killed three people and left so many with prosthetic limbs, organizers sought a way to be more inclusive for para athletes who had long participated only for the satisfaction of finishing.